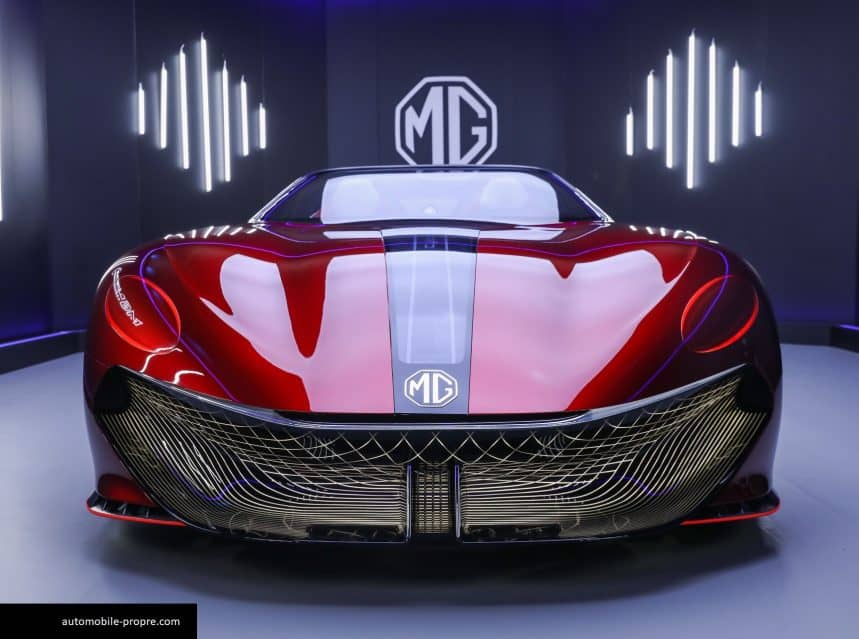 MG has released a first teaser of its Cyberster electric roadster. The production is approaching for this model.

At the start of 2021, MG presented the Cyberster concept at the Shanghai Motor Show, a sporty 100% electric roadster with a gothic look and impressive characteristics on paper. Eminently inspired by Tesla Roadster! And intended to embody the modern version of the great classic MG B.

A few days ago, the brand released a video teaser, which reveals a little more. See the video below.

We notice very original light signatures, and especially at the back, the resumption of the design of the English flag “Union Jack”, already seen at Mini, but this time in the other direction.

We can also see at the opening of the hard roof, a cockpit covered with two-tone red and white leather, a “Yoke” type steering wheel from Tesla.

At the end of the video, we also understand very clearly that the opening of the doors is of the “elytron” type, making this Cyberster a very original electric car.

MG announced by presenting the concept that it would hit 62 mph (100 km/h) from a standstill in less than 3 seconds and provide a maximum range of 800 kilometers (500 miles) on a single charge. There is no doubt that it will be one of the most interesting electric sports cars of the coming years.

The production of the new Cyberster has been postponed until next year: MG has planned to present its new electric roadster at the Guangzhou Motor Show scheduled in November 2022, but the uncertainties over the smooth running of the show due The Chinese government’s “zero tolerance” policy against the pandemic led the company to step back and opt to launch the advertising model next year in April 2023.